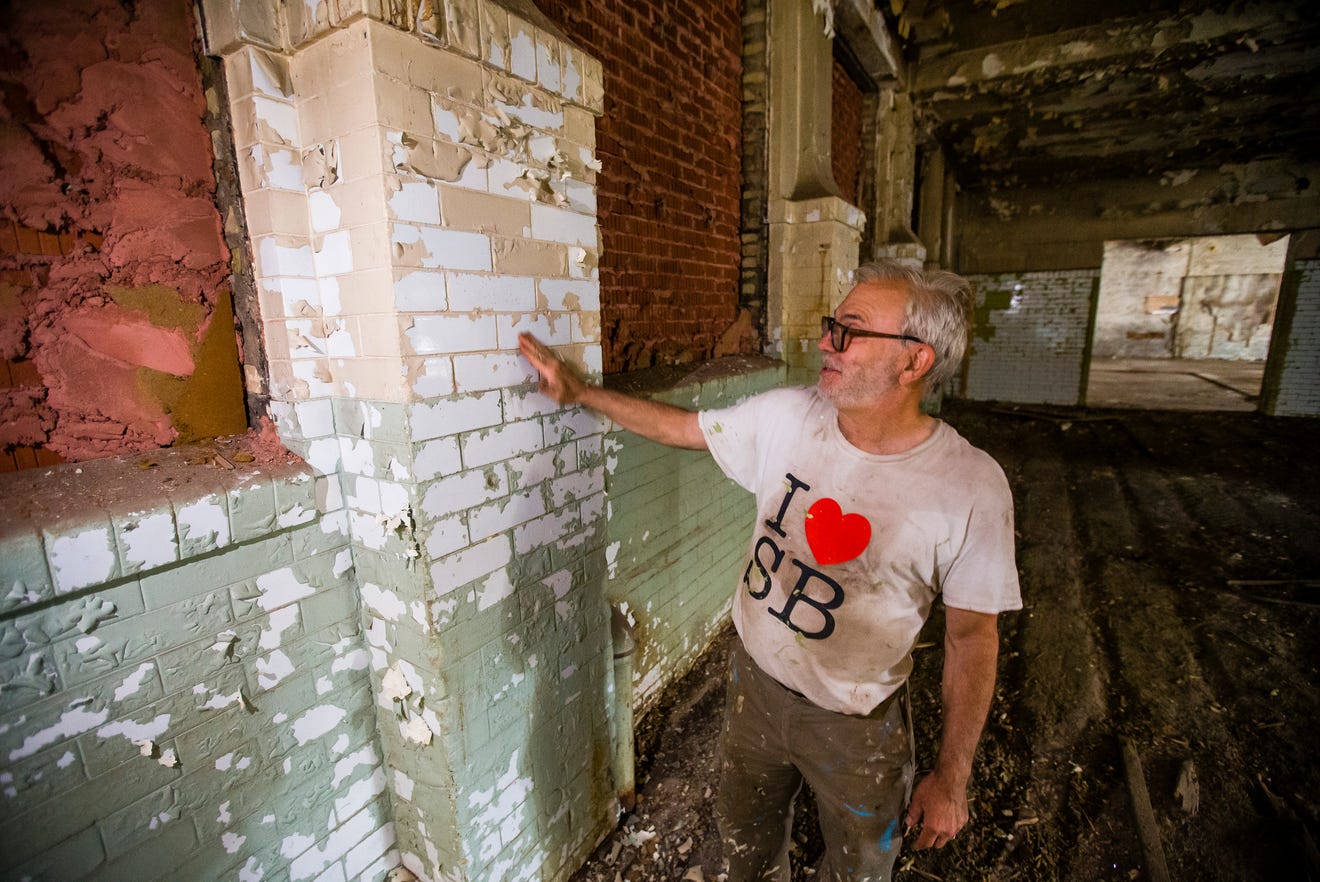 But, below his feet, the original oak floor had already rotted and been removed, thanks to a roughly 6,000-square-foot hole in the roof that had let rain and snow collect inside of this vacant former bakery at 906-910 Portage Ave., just over a half mile from downtown.

Sprawling piles of garbage were removed this year. Keen could now see across 56,000 square feet of often dark, dank, open floors. He saw past the puddles and mildewed arcade games littered in the basement.

Those tiled walls could become part of the new storefronts on Portage. Windows could again appear in their bricked-in spaces of the historic former Ward Baking Co.

“We’re really trying to create life on the street,” said Keen, managing partner of a group whose goal is to turn this into a nest for up to 60 businesses, artists or organizations in three years.

At an estimated total cost of $3.75 million, the development’s biggest challenge now, Keen said, is finding the bank financing and the first possible tenants “when this is the best that it has looked in a decade.”

“You have to have the vision and the patience to see that, in the beginning, you’re going to have almost no impact,” he said.

Banks, he said, like to feel confident that such a project would land tenants. That may be easier for buildings designed for just two or three tenants, but that wouldn’t fit the vision of what Keen and his project partners aim to do. They want to draw together a collection of small and larger enterprises that could feed off each other and bring life to a previously stagnant area that Keen calls Portage Midtown.

Across Portage, there are homes that he’s renovated and two 600-square-foot “tiny houses” that he and partners built this spring (with hopes for more in adjacent lots), plus the weekly South Bend Bike Garage co-op that bustles with volunteers each Wednesday evening. It’s all a few steps from the Near Northwest Neighborhood Center and its coffee shop.

They began cleanup and roof repairs in February. Keen hopes that, if the windows and storefront doors can be installed early in the process, they’ll inspire banks and the public to see how engaging the structure could be.

The city has discussed allocating tax incremental finance dollars to help with the windows and doors along with other ideas, such as an outdoor plaza here and improvements elsewhere in Portage Midtown, said Santiago Garces, the city’s executive director of community investment.

Garces said the city is looking at this and other corridors and how to “reactivate” such neglected mid-town spaces so that they draw people from their neighborhoods and even from the region.

Keen said The Bakery Group’s goal is to repair the building enough so that, in the first year, it could gain an occupancy permit and move in 10 to 15 tenants — or about 30% occupancy — then 70% in the second year and 100% in the third year.

They would build it out one section at a time, structuring it according to what the tenants want, he said.

Initially, Keen wanted to knock the Ward building down so that there’d be eight vacant lots to develop or build homes, but Anderson convinced him otherwise and offered to become a project partner.

“Monte said this was too beautiful of a building,” Keen recalled.

It reminded Anderson of Tyler Station in Dallas, a former wax paper factory, built in 1925 next to a train station, that he turned into a co-working space, now filled with a brewery, fabricators, retail shops, artisans, attorneys, churches, filmmakers, martial arts, wellness instructors and others. 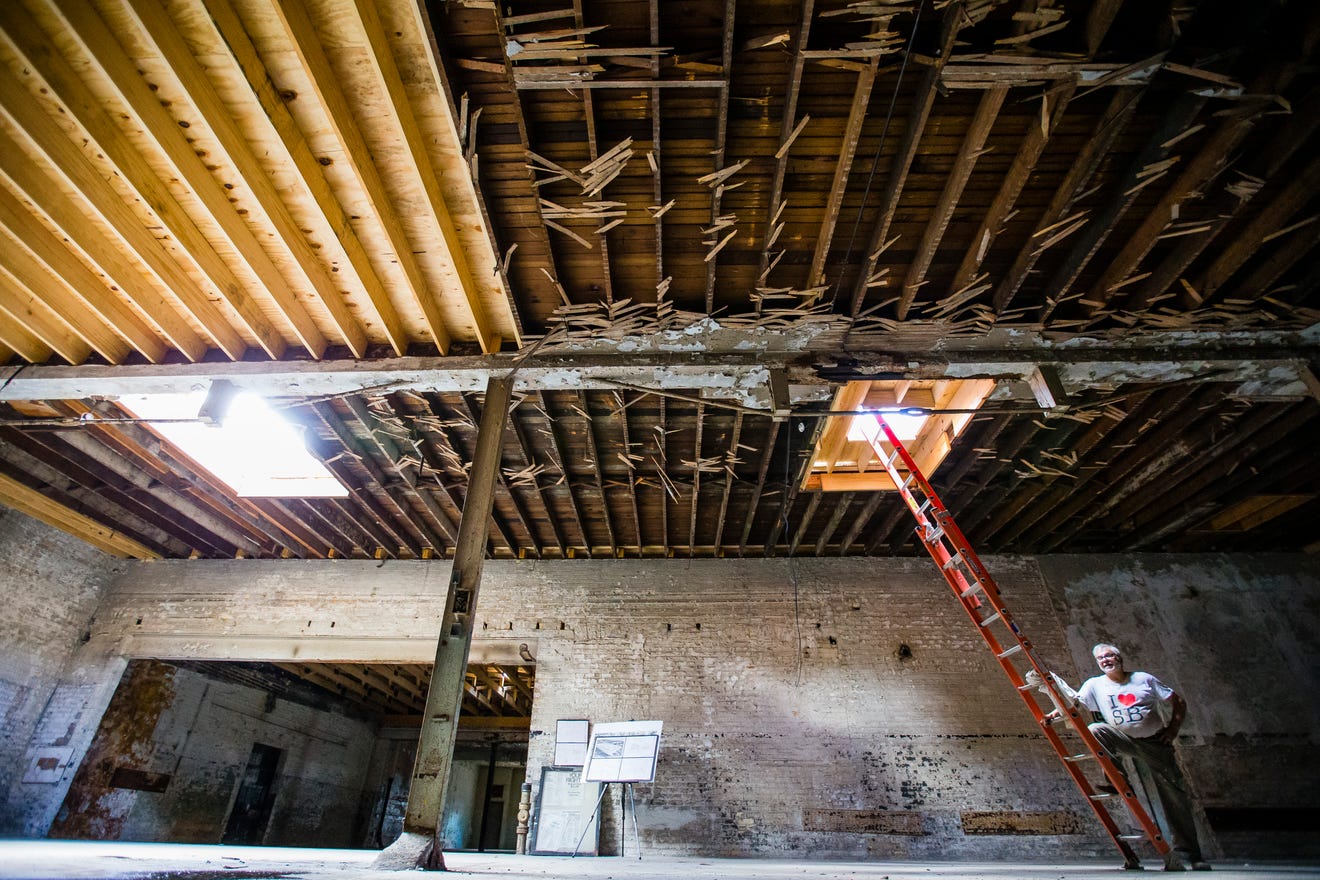 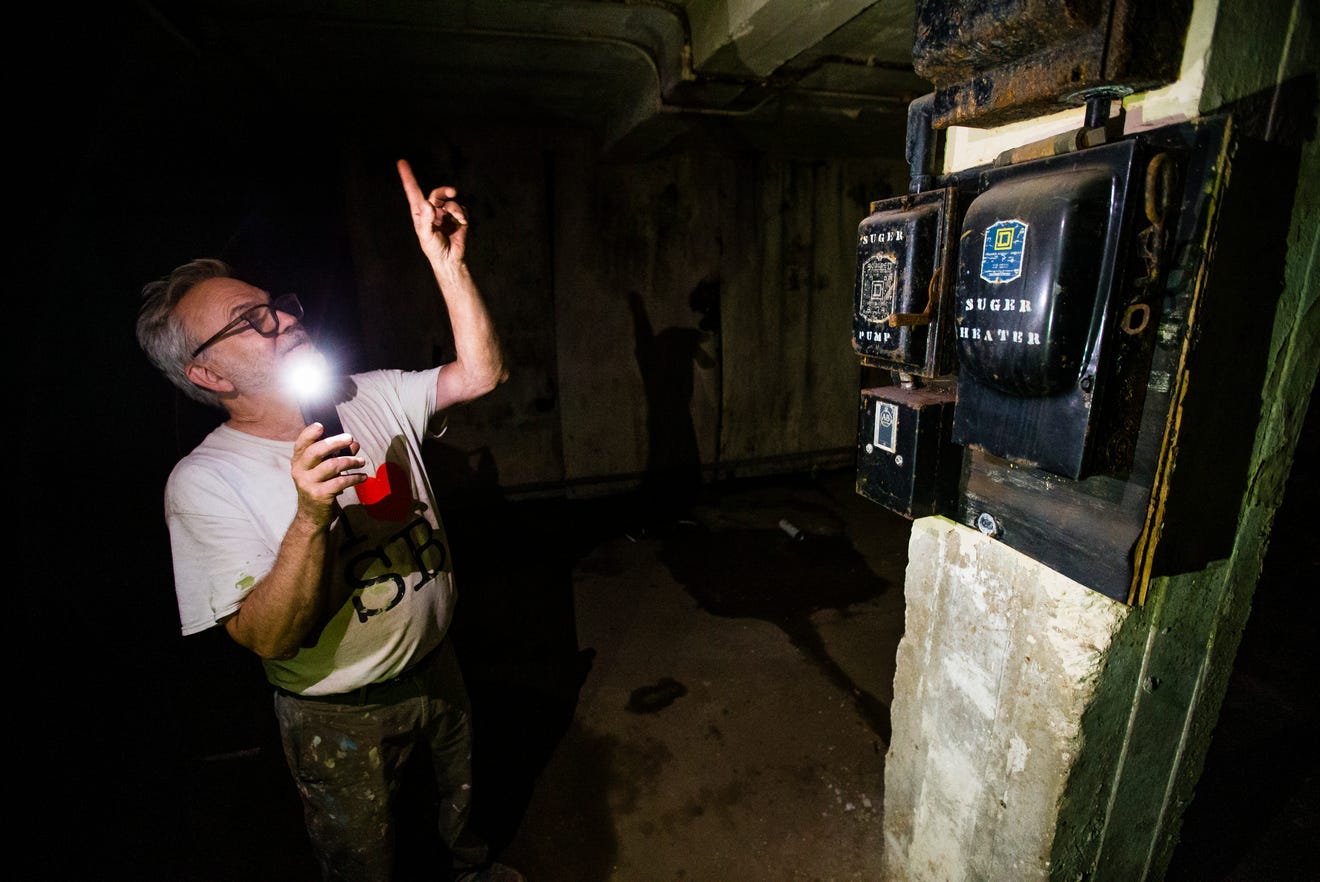 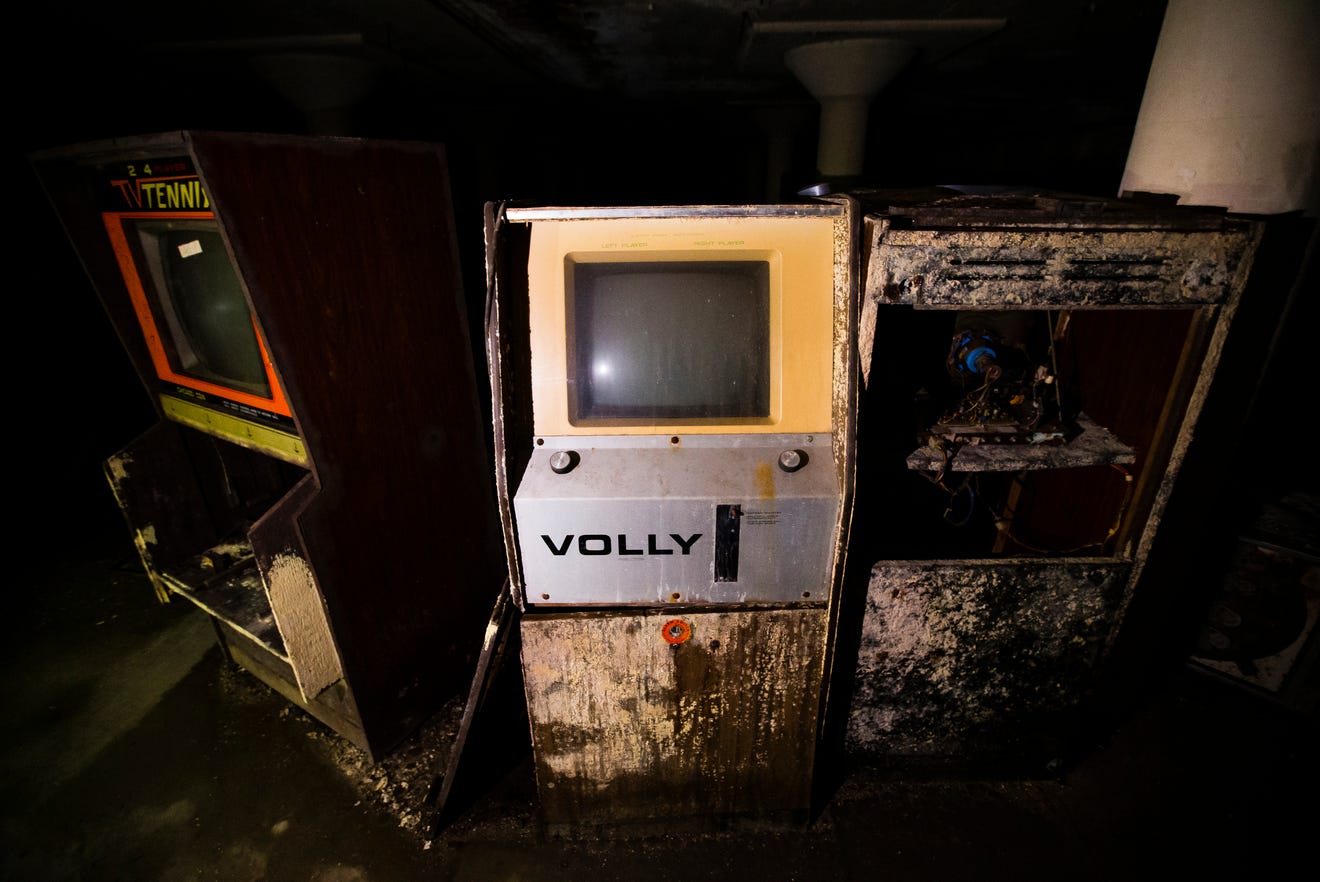 It’s an example of incremental development. The idea is to build wealth in a neighborhood one piece at a time through small-scale projects. Anderson, who is a founding member of the nonprofit Incremental Development Alliance, has been coaching and mentoring Keen and other aspiring developers in South Bend in recent years, Garces said.

Likewise, Keen hopes for a mix of tenants in the Ward building, from small businesses that are incubating to others that are “full blown.” By working close to each other, he said, they could talk, share, advise and mentor each other.

He said he’s been with a wide variety of potential tenants: restaurants, microbreweries, a spa, an individual who records podcasts, an upholstery renovator and so on. No pre-leases have been signed yet.

City officials are eager to see private investment now that $410,000 of unpaid property taxes have racked up from the building’s previous owners since 2010. South Bend Common Council on June 14 voted 8-0 to approve a tax abatement that would freeze the site’s property taxes for the first two years. After that, the building’s taxes would be cut by 100% the first year, then by 90%, 80% and 70% in the subsequent three years.

“This is exactly what an economic development revitalization area and tax abatements are designed for,” council member Lori Hamann, D-at large, said, noting how it restores brownstone buildings and “brings life back to an area.”

From the public, Jordan Giger asked if small, minority-owned businesses would be hired for the renovations.

“We are committed to being as inclusive as possible,” Keen replied, adding that he’s already been talking with women and minority entrepreneurship programs at Saint Mary’s College, the University of Notre Dame and elsewhere in the community.

The Ward building was built in three parts: First, the original Busse Bakery built by German immigrants in 1908 at the southern end. Then a larger, two-story space built in 1919 by the Ward Baking Co., which had acquired Busse Bakery. Then a final expansion by Ward in 1945.

By 1976, as Ward was going out of business, the local company Ford Distributing bought the structure and used it for storing and distributing cigarettes, coffee, candy, glassware and other goods until it closed and left it vacant well more than a decade ago.

Work to replace the roof is nearly finished. Keen hopes to install 16 skylights and also cut holes into the main floor to create balconies over the now-darkened basement.

Keen found the original drawings for the building, which were helpful to current plans, hiding inside of a cabinet among the junk that cost $50,000 to remove. A friend took a small Sunfish sailboat that was stored there. Another $137,000 was spent to remove asbestos, including from two giant boilers in the basement that were encrusted with the carcinogen, where Keen dreams of installing a bar with the cleaned up cylindrical beasts there as a decorative element.

Upstairs, he sees “one of the coolest spaces in South Bend.”

Light pours through the current windows, which will expand as the bricked-over windows are reopened.

The basement is a damp, rogues’ gallery of badly corroded and mildewed pinball machines and early-era video games and a stack of restaurant glasses in eroded cardboard. Once it’s renovated, Keen said, he’s talked with people about a possible salt cave here or growing mushrooms.

The deed for the building arrived in Keen’s mailbox on Christmas Eve, and he’d joked, “It’s either the best Christmas gift ever or the biggest lump of coal in my stocking.”

But, given how much junk was cleared out this year, Keen laughed and said, “It’s much better than it used to be.”