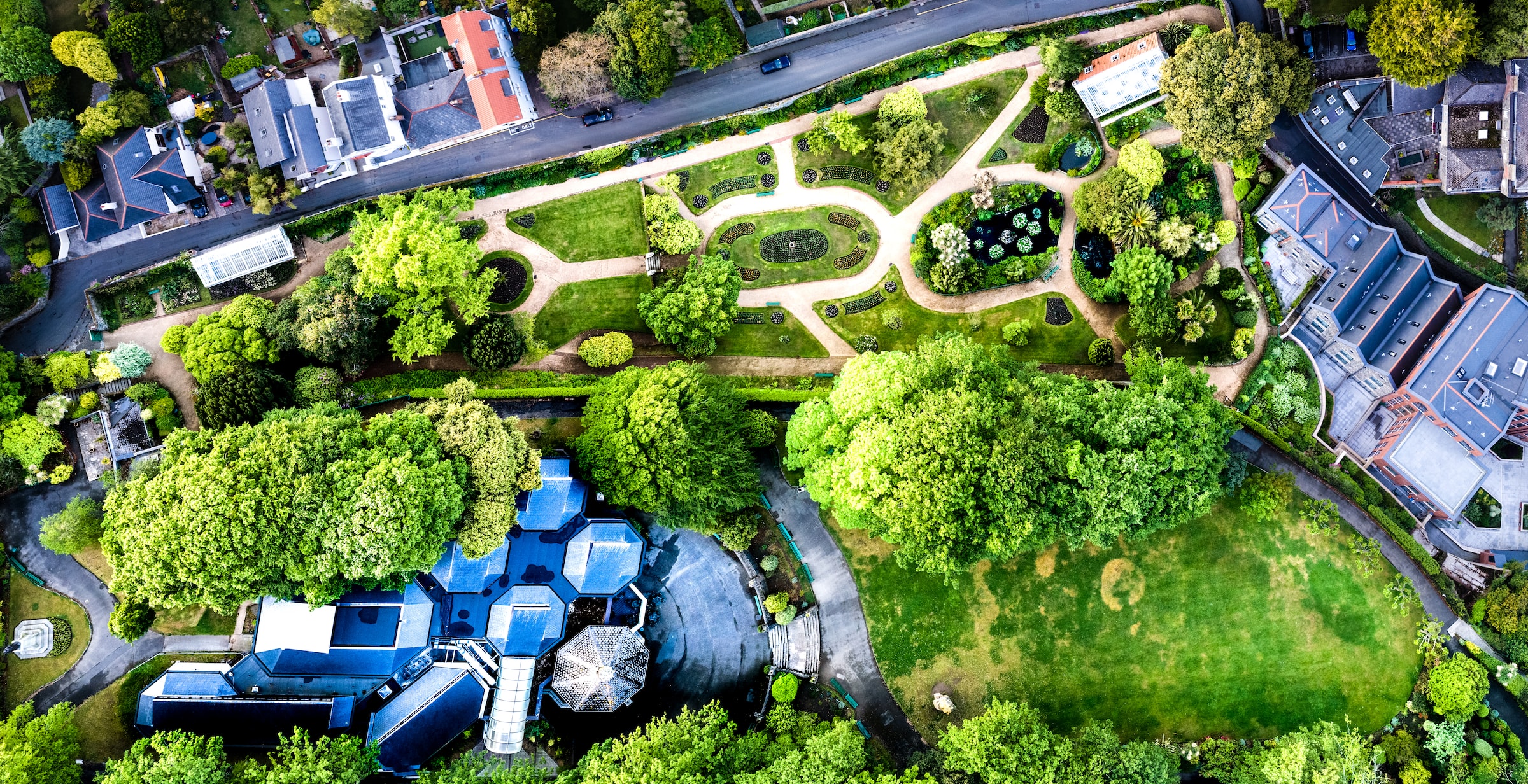 Suburban retrofit is ‘autophagy’ of the built environment

Conventional suburbs are cities that have grown obese. We need processes for reusing their worn-out parts and creating something of higher value.

My summer reading sometimes leads to connecting diverse topics with my area of professional focus—the built environment. I recently read a book on fasting that introduced me to the body’s recycling process called “autophagy,” and I thought about suburban retrofit. I don’t know that anyone else would make this analogy, but I think it’s apt.

Autophagy means “self-eating,” which sounds macabre, but is the body’s vital process of reusing old, worn-out cellular parts. Recycling often produces goods of lesser or similar value—think of recycled paper—but autophagy takes our body’s junk and makes it highly valuable, using damaged cell parts for energy and building blocks for new growth. In 2016, Yoshinori Ohsumi won the Nobel Prize in medicine for work in this area.

Autophagy helps us to survive in times of extreme stress—such as starvation—but it also is important for routine health maintenance. If this process breaks down, illness such as cancer may result.

Similarly, retrofit is critical to the long-term health of suburbs. It’s the process of taking low-value elements of the suburban environment—say a defunct mall or out-of-date shopping center—and building, say, a mixed-use urban center, affordable housing, a health district, or a park.

A short history of conventional suburban development (CSD) is warranted. CSD makes up most of new development that has occurred since 1950s. Due to zoning regulations and development practices, different uses and housing types are separated from one another in a low-density pattern. Rather than a tight network of streets that is found in almost all cities and towns prior to 1950, CSD takes a dendritic (“tree-like”) form with large blocks and isolated subdivisions, where local streets lead to collectors, then to arterials. The latter thoroughfares gather all the traffic, and that’s where the commercial uses locate. CSD now makes up about 90 percent, give or take, of our metropolitan regions by area.

Due to the separated, low-density form, CSD has a lot of underutilized, low-value land. This is especially true when commercial properties like malls and office parks decline economically.

US suburban environments, especially if they have been around for more than three decades, are riddled with such sites. When dead and dying pieces of the built environment achieve a critical mass, they threaten to bring down the value of everything around them. That is why it is important that retrofit occur in suburbs, once they get past their first generation—30 years—of growth.

The question is, what kind of retrofit will take place? Will it be “recycling,” or “upcycling?” The latter is the process, according to Wikipedia, of creating something of greater value. Here’s a couple of examples of upcycling in a suburban environment: 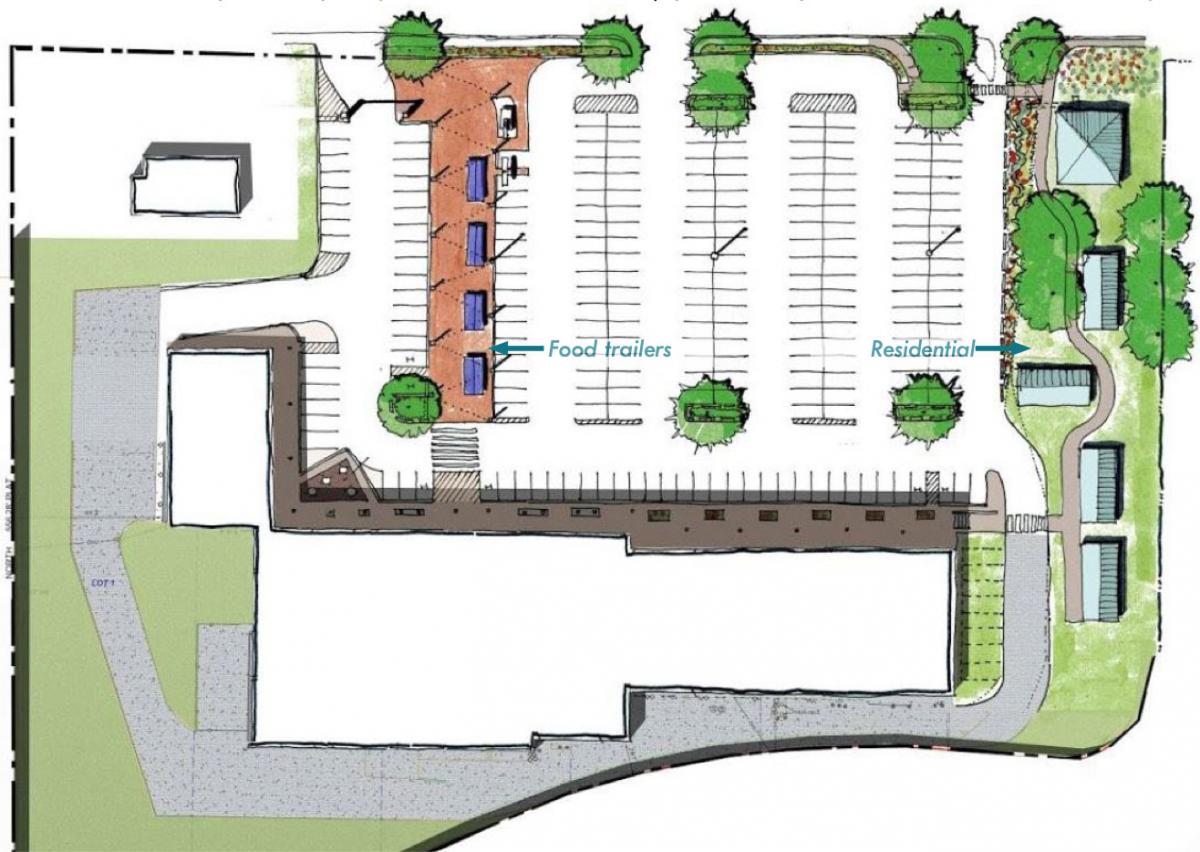 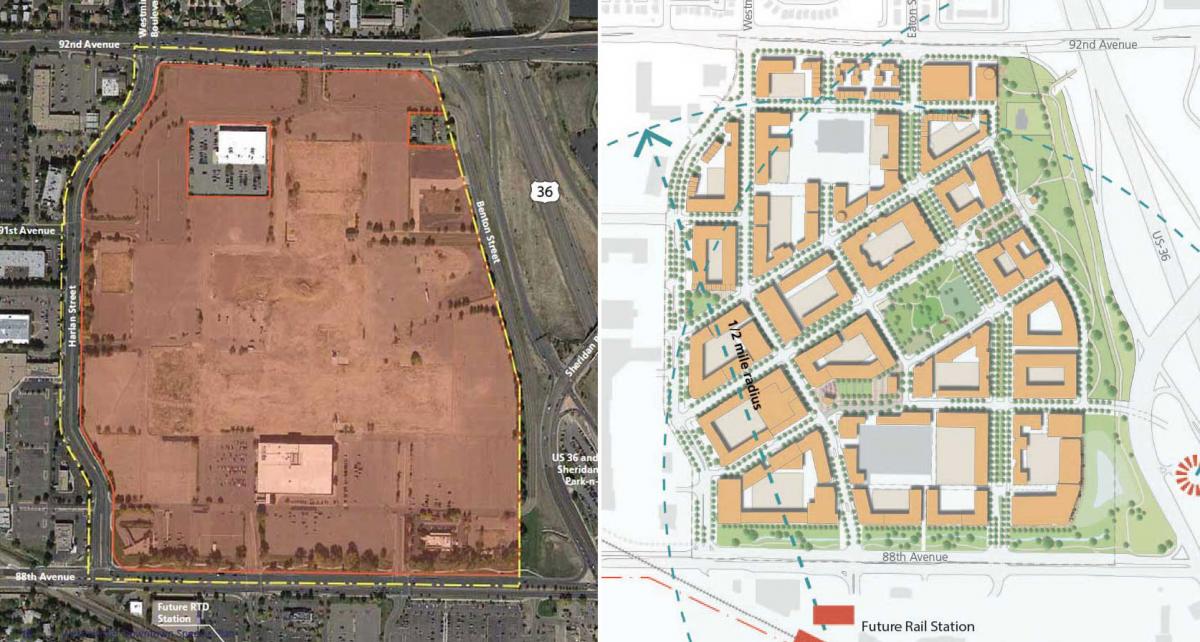 Grow Desoto Market Place. Developer Monte Anderson purchased the The Brookhollow Shopping Center in Desoto, Texas, a standard neighborhood strip mall with 50,000 square feet in a majority Black suburb, in 2016. “Rather than knock the building down and start from scratch, he worked from the inside out, adaptively reusing the building in a way that would provide uses to foster walkability and serve as a hub for the community to gather,” according to a report by Christopher Kuschel for CNU. Anderson filled the reclaimed mall with small local vendors, added residential units to a strip of land at the edge of the site, and reclaimed part of the parking lot for food trucks and vendors.

Downtown Westminster. The Westminster Mall in Westminster, Colorado, declined in the early 2000s after operating for 40 years. The city has led a public-private partnership to redevelop the site into a downtown that the Denver suburb never had. It has been rapidly developing, even during the pandemic, with apartments, entertainment (brewpub, bowling), retail, hotel, restaurants, medical offices, and more. The new urban plan has established a tight network of streets and public spaces that allow far more value to be created than ever existed in the heyday of the mall.

The potential for suburban upcycling is tremendous. A recent analysis, reported in Public Square, of the Boston region showed that 125,000 housing unit could be built by retrofitting just 10 percent of strip malls. “Retail strip redevelopment … allows communities to accommodate new growth without the loss of the valuable open space required for new subdivisions or greenfield multifamily development,” notes the report.

We need mechanisms to reuse these sites in the suburbs, much like our bodies creatively reuse broken down parts of cells. Imagine if our bodies didn’t do this—if we kept adding new cell parts as we accumulated those that are broken. We would all quickly become obese and grotesque.

That’s kind of what has been happening in the suburbs, which can be thought of as cities that suffer from obesity. We need codes and development practices that constantly reuse the failing parts of the suburban environment as places of higher value. With these mechanisms in place, we could incrementally transform sprawl.